Sweden may believe in socialized medicine. The US clearly doesn’t. But despite deep differences in approach, both can agree that it is imperative for good governments to educate their population on health and nutrition. Ideally, this should keep people healthy and drive national healthcare costs down. Socially and economically, these are both good outcomes.
The US has been active in providing nutritional guidelines for Americans for almost 100 years. President Lincoln signed the Agricultural Act that created the USDA in 1862. Almost 50 years later, under President Woodrow Wilson, the USDA launched its first nutritional campaign; fittingly, aimed at children. Even way back then the first food guide (Hunt, 1916) created five categories that included milk & meat; cereals; vegetables & fruits; fats & fat foods; and sugar & sugary foods.
75 years and 4 versions later in 1992 the now famous (and recently retired) Food Pyramid was launched in the US. Ironically, this was inspired by Sweden!  It was first conceived there in 1972 as a response to high food prices in Scandinavia, so consumers could strike a balance between nutrition and affordability.
The US Government has just taught us that despite being adopted by more than 25 countries (with minor variations) the Pyramid is not a stable structure anymore (outside Giza!). We have just retired it and replaced it with the Food plate.
“Why”- you may ask if you are a pyramid lover. “Who doesn’t understand it”? Why fix it if it ain't broke?
But others argue that it was ineffective. Since the pyramid was launched in 1992 Americans have become fatter, unhealthier and poorer, they say. What makes this whole situation doubly ironic is that while the USDA launched the Pyramid, the FDA launched the nutri label. While the Nutrition Labeling and Education Act (NLEA) was passed in 1990, its implementation was almost in tandem with the Pyramid.

But this USDA-FDA double header has not slowed the galloping healthcare costs in the country. According to a 2011 World Health Organization study, the United States spends more of its GDP (18%) on healthcare and more per person ($8600) than any other nation. We spent $2 trillion on healthcare last year!
The unfortunate truth is, much of this can be directly attributed to the food we eat. Equally, it’s because of the food we don’t eat.
Here are some hard hitting facts:
Today more than 2/3rds of adults are overweight! In fact the problem is so severe that epidemiologists studying obesity have now resorted to categorizing folks as “overweight”, “obese” and “extremely obese”!
Emory University's Rollins School of Public Health found in a recent study that Americans, 50 and older are today twice as likely to be diagnosed with heart disease than Europeans.
The Census Bureau report (Sep 2011) said US Poverty rose to 15%, highest since 1993
Such a dismal report almost begs federal intervention. We probably have the healthiest President and First Lady in the history of the White House today. So it's no surprise they are deeply concerned by the failing health of Americans. That concern is best symbolized by Michele Obama’s lead in launching the Food Plate replacing the Pyramid. 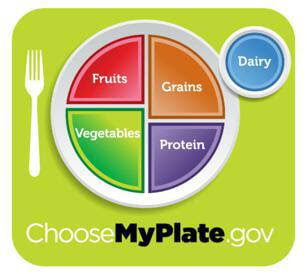 For a light handed government, it is tempting to tinker with recommendations instead of regulations and hope free markets and responsible corporations will somehow make us all healthy. But noble intentions notwithstanding, this plate is unlikely to point us in the direction of good health and wellness. Lets take a closer look at the plate.
Vegetables, Fruits, Grains and Dairy in the picture above are all foods. They can and should be eaten daily in some proportion that the plate is trying to convey. But there is a problem. “Protein” in the bottom quadrant of the plate is not a food! Proteins are organic compounds that contain nitrogen. They are molecules made up of amino acids. Meat is not protein. It may be an example of a food that contains protein. Like eggs. Like vegetables. Like amaranth. Like quinoa. Like lentils.
Surely, we quibble. “Protein”, USDA may say, is common parlance for meat.  So why not  chose to substitute food with amino acid in this quadrant! Maybe we should be grateful that they did not change vegetables to carbohydrates or fruits to sugar and dairy to fat.
But the real BIG problem with The Plate is the hyperproteinization of America. I could not help making some calculations. I measured the area of the “Protein” sector in the diagram and found it was around 23% of the plate. As it turns out the recommended daily value of protein is 10-35% or around 50 grams, give or take a few. You might think these 2 ways of saying it is confusing and not internally consistent. You are right. They are not. Is 50 grams 10% or 35%?
But that is a whole different discusion.
Hyperproteinization will result because Vegetables, Grains, Dairy, all contain protein. Fruits contain less, but they too contribute their share. So the total intake in an already protein rich society as a result of this plate is way beyond what our bodies need. Enough studies have shown the direct linkage of excessive protein to cancer, obesity and heart disease.
I think we need to revisit The Plate. 150 years after Abraham Lincoln, we still haven't got it right. When the history of nutrition science and public policy is written 150 years from now, we dont want them to say we told our citizens to eat vegetables, grains, fruits and proteins.